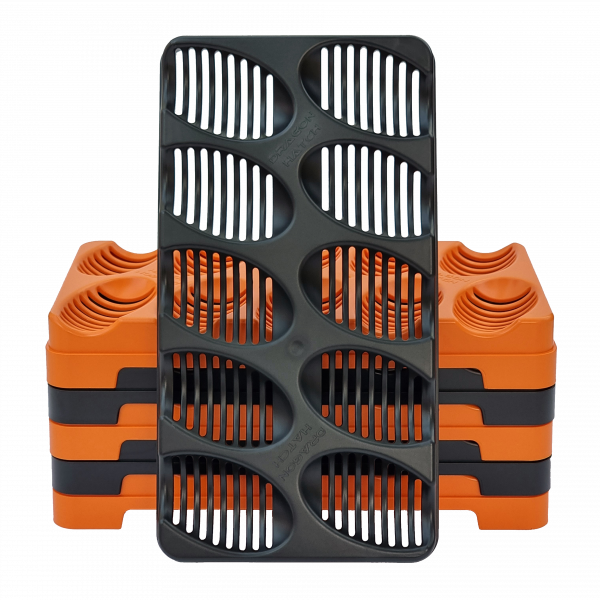 What are hatch trays for?

Hatch trays were designed for reptile breeders to hold their eggs during incubation.

The hatch trays keep the egg separate from the damp substrate in the incubation box and stop the eggs rolling around.

What's special about a Dragon Hatch tray then?

Hatch tray designs to date have had a linear grid of egg holders this, and the incubation box, limit the maximum length of the eggs which can comfortably fit in such an arrangement.

​In a Dragon Hatch tray the egg holders are angled and offset to allow opposing eggs to make maximum use of the space in-between to accommodate a longer egg.

In addition, Dragon Hatch trays feature Hang-Ova cut-out edges to allow your eggs even more room to extend into without having to tilt the egg - the maximum room available depending on your choice of incubation box.

​Our unique design has been registered in the UK under design No.6095660, and will soon be protected in other jurisdictions.

How big/heavy is a Dragon Hatch tray?

How many eggs can a Dragon Hatch tray hold/can it be used with unseparated eggs?

​A Dragon Hatch tray holds up to 10 eggs the same as a standard layout tray.

Whilst you could use our trays with unseparated eggs, the egg holders are deeper than most other trays which makes it less suitable for this purpose - in short you would be better off using another solution if you do not separate your eggs.

You could however stack additional separated eggs on top of those held in the tray - you would have to consider the vertical room available in your incubation box though.

What is a Dragon Hatch tray made from/can I put it in a dishwasher/is it recyclable?

​Dragon Hatch trays are made from a plastic called ABS, this is the same material that Lego is made from, for example.

Whilst Dragon Hatch trays are dishwasher safe we would not recommend this as the best way of cleaning the product as dishwasher detergents can leach into (any) plastic products over time, tainting them - it would be better to hand wash.

Why are there no lifting devices on a Dragon Hatch tray

​Whilst some existing trays have chosen to provide lifting devices which fit into slots in the tray, on the Dragon Hatch tray this area of the tray is utilised to provide maximum space for the eggs.

Instead the leg sections on the sides of a Dragon Hatch tray have been made higher and broader to assist the breeder in getting their fingers under the edge to lift the tray.

​Where are Dragon Hatch trays made?

Dragon Hatch trays are designed and made in Wales, UK.  We are very proud to be representing Welsh innovation and quality...and Wales is the home to Dragons, so it makes sense that we should accommodate dragon sized eggs!